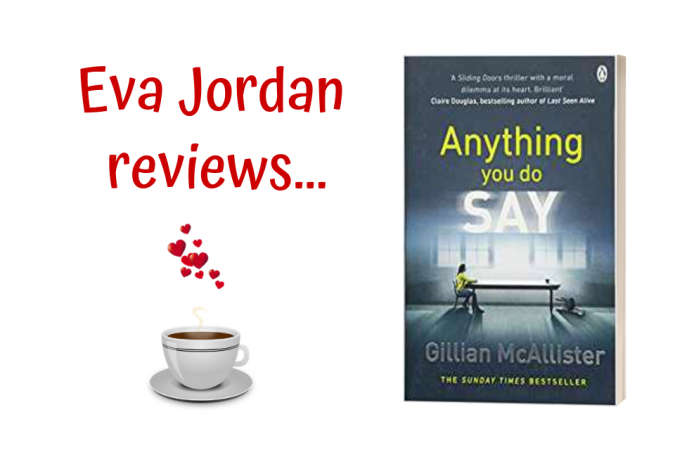 Cleverly written, Anything You Do Say is the first Gillian McAllister book I’ve read, and it definitely didn’t disappoint. Described as a Sliding Doors psychological thriller, the story starts with Joanna, the main protagonist, committing a criminal offense, albeit accidentally, at which point the story splits into two; one called Reveal, the other, Conceal.

Set during the present day, both stories, told in the first person, centre on Joanna Oliva, a young woman living in London with her husband, Reuben. The story begins with Joanna on a night out with best friend Laura. They are in a bar and leave when a man, who has been harassing Joanna, unsettles them. Once outside, and away from the bar, Joanna and Laura call it a night, say their respective goodbyes and head home in different directions. Joanna hears someone walking behind her. Too afraid to look she is convinced she is being followed. She spots a flash of red at the top of a set of stairs on a towpath, which confirms her suspicions. Her pursuer is wearing the same red trainers worn by the man who earlier, in the bar, had been harassing her. In her panic, Joanna spins round and pushes “his body, firmly, squarely, the hardest I’ve ever pushed anything in my life” down the concrete stairs, and this is where the story splits.

We then follow Joanna’s journey where in one story she reveals what has happened, and in the other, she conceals what she has done. As expected, both choices have huge ramifications, which impact on both her life and that of friends and loved ones. Joanna is one of life’s procrastinators, who, unlike her husband Reuben, prefers to avoid her problems—“He’s (Reuben) never done denial. Not like I have… He confronts issues head on… Calmly, not hysterically, not the way I eventually tackle things I’ve been avoiding for years.” However, due to her actions, Joanne is forced to face up to herself and what she has done—in both stories.

Gripping, pacy, and well written, Anything You Do Say glides easily between the two parallel timeframes with no awkward repetition. I was totally invested in the characters and particularly enjoyed the exploration of the ‘what ifs ’ in each story, as well as the diverse responses and differing attitudes to Joanna’s behaviour by those closest to her. Well worth a read, and one I really recommend.

“Wild horses 🐎 couldn’t drag me away...” 🎶
Goodnight from the beautiful fens 🌅