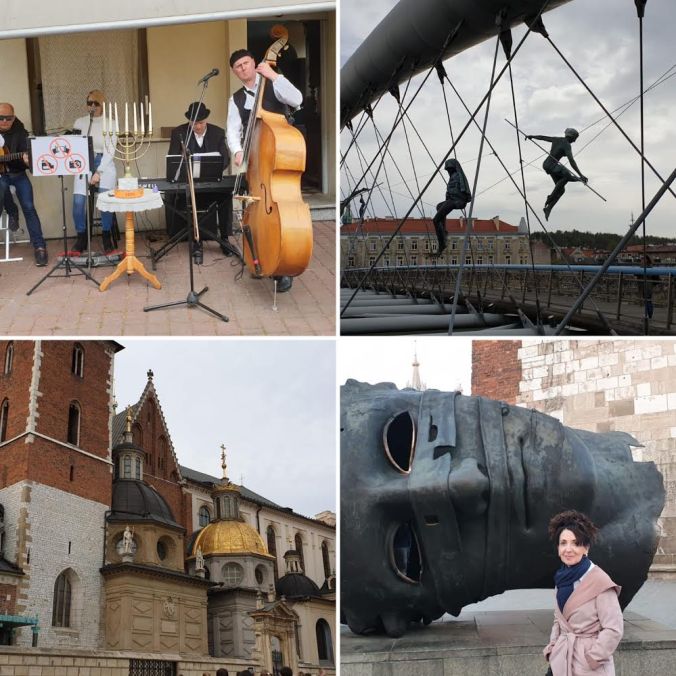 Back in April this year I was lucky enough to visit the beautiful city of Krakow in Poland. If you’ve never been I highly recommend it. Dating back to the 7th century it is one of Poland’s oldest cities, rich in history and culture. It is also one of the few eastern European cities to escape bombing during World War II, which is why many of the streets and architecture remain exactly as they were before the war. In 1939, during the Nazi occupation of Poland, the Third Reich began rounding up all Jewish residents and confining them to overcrowded ghettos before later deporting them to concentration camps. Which was another reason for my visit to Krakow—I wanted to visit the nearby infamous Auschwitz-Birkenau camp and pay my respects to the many innocent men, women and children that had been imprisoned and, in most cases, murdered there. 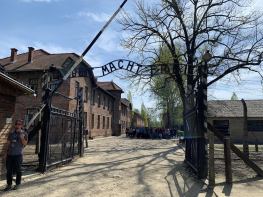 First stop was the Auschwitz camp where we entered via the notorious iron gates and emblazoned words “Arbeit Macht Frei” ­­­­­­­(Work Sets You Free). My biggest fear at this point was that people would attempt to take selfies––thankfully no one did, with those taking photos (myself included) doing so quietly and discreetly. Walking through the gates I noticed the old lookout towers and surrounding, once electrified, barbed wire fencing, which made me shiver, despite the warm weather. Our guide then led us to various rooms in numbered buildings known as blocks, which had once housed prisoners, some of which now contain physical reminders of those murdered. It was heart breaking to witness the hills of human hair, shoes, hairbrushes, clothes, and toothbrushes displayed behind glass panels. Equally appalling were the standing chambers, suffocation chambers, starvation chambers and the firing wall of notorious Block 11—otherwise known as the punishment chamber.

Our next stop (10 mins drive away) was Birkenau (which reportedly held over 90,000 prisoners in 1944) also known as Auschwitz II. Built to keep up with mass European arrests taking place it evolved into a network of camps where most prisoners were exterminated, often in gas chambers, or used as slave labour, while other prisoners were subjected to barbaric medical experiments led by Josef Mengele. Our guide took us inside what was once one of the women’s barracks. These were brick buildings often housing up to 700 people, sometimes more, containing three-tier wooden bunks (sleeping up to six or seven people to each bunk), shoddily built, lacking any real heating or sanitation facilities. Our guide then led us alongside the same train tracks that had transported prisoners from Poland and other parts of Europe via overcrowded cattle trucks into the camp. We then walked the same route to the “shower blocks” that on arrival, most of the elderly men and women, and women with young children believed they were going to, with the promise of a hot meal and a bed afterwards. History tells us otherwise though, and we now know they were in fact marched straight to their deaths via the gas chambers, their bodies then burned in the nearby crematorium.

As our tour ended, I took stock for a moment and looked up, feeling the heat of the sun on my face. I wondered how the prisoners of the camp must have felt on the days the sun shined for them, if they found the energy to notice or enjoy it—even for a few seconds? I concluded that what I found most difficult to believe about Auschwitz-Birkenau, and the many other camps like it, was that its mass extermination of ordinary people took place very recently, less than eighty years ago to be exact. And it wasn’t just Jews that were targeted, many non-jewish artists, writers, journalists, teachers, politicians, Romas, communists, homosexuals, and mentally and physically disabled people met their death––anyone basically, deemed unfit for Nazi Germany. Sadly though (although perhaps not on the scale of the Holocaust), our history books are littered with accounts of genocide, both before and since World War II.

However, there have been many inspiring accounts of survival since those terrible events took place. Stories about people that never gave up hope, who went on to live full lives, many of whom married and had families of their own. Ten years ago I was privileged enough to meet Eva Clarke, one of the Holocaust’s youngest known survivors. After spending time in Auschwitz, her mother, Anka, gave birth to Eva on a wooden cart in the shadow of the prison gates of Mauthausen Concentration Camp in Austria in April 1945. Eva explained how her mother once told her that before her incarceration she would never have predicted being able to withstand such an experience, but when it happened, and for no real logical reason, she just assumed she would survive, attributing a bit of luck and the overwhelming love for her unborn child as one of her greatest motivators to keep going.

So, as long as there is good in the world, and love, there is always, I believe, hope.