Something extraordinary happened to me a couple of weeks ago. Tuesday 8th March 2016 was International Women’s Day and being both a woman and a mother, I felt compelled to mark and acknowledge it. With its humble beginnings going as far back as 1911, International Women’s Day is regarded by most as a way to celebrate the economic, social and political achievements of women.  And, although the world has made great strides toward gender equality, especially during the last several decades, major disparities between men and women still exist.  Women from all walks of life still face disadvantages. The United States, is still yet to see a female president, and among the United Kingdom, Germany, and Australia, the tally remains at one.

Women around the world earn on average only 60 to 75 percent of men’s wages and are 65 percent more likely to work in informal, and often unpaid, work. However, although there is still some way to go, women in more developed countries have come a long way. Sadly, this is not the case for those living in countries still developing.

Activists for women in developing countries tend to focus on more basic issues like combating violence against women and providing equal access to vaccines, basic healthcare, and primary education. This led me to remember Malala Yousafzai who was shot in the neck and head by the Taliban in October 2012 in the Swat Valley of Pakistan. Malala was attacked because she advocated a girl’s right to an education; an idea that the Taliban fervently opposed. She was only 14-years-old at the time and amazingly, Malala survived. Therefore, as a woman and a writer and as she is also mentioned in my debut novel, what better way to mark International Women’s Day than with the following quote from Malala,

“Extremists have shown what frightens them most: A girl with a book”

So, just a little before 8am on that said Tuesday morning with a half-eaten piece of toast hanging from my mouth and phone in hand, I gave a final shout to my 17-year-old son reminding him that we really needed to leave if we were going to make his dental appointment on time. I hovered impatiently by the front door, hoping and praying that the banging and crashing sounds on the ceiling above my head, intermingled with some unintelligible mumblings of teenage speak, were a strong indication that my son had understood the urgency in my voice on this, my third (and final) call, and was finally getting ready to depart the floordrobe he calls a bedroom.

As I waited, I quickly found and posted the said quote from my mobile phone, to both my Twitter and Facebook accounts. Tapping various icons on my phone, I pressed send just as my son (or the grunt in the hood as my Dad calls him), made an appearance at the top of the stairs. Shoulders slumped as if bearing the weight of the world upon them, and, with much cajoling from me, my son slowly made his way down the stairs. Hoping I’d get at least a couple of likes or a couple of retweets for my recently published posts, as is the usual for me, I thought no more about them and we left the house and drove to the dentist.

My phone, although set to silent, was also on vibrate and ensconced somewhere in the black hole of Calcutta, otherwise known as my handbag, which was sat in the passenger foot-well of my car. Slowing my car down as I approached the red flashing lights of the railway level crossing on the way to my son’s dental appointment I heard my phone make a familiar buzzing sound. This is usually indicative of a text message or, as is often the case, someone has liked or retweeted something I’ve posted on Twitter. I felt sure it was my recent post concerning International Women’s Day and again thought no more about it. However, rather unusually my phone continued to vibrate all the way to the Dentist. When we finally arrived at our destination I quickly checked my phone and as suspected I had received likes and retweets for my Malala tweet. Hers were simple but brilliant words so I wasn’t surprised. However, what was surprising was that the bright screen of my phone informed me I already had 150 retweets – an all-time record for me.

“Wow,” I said rather proudly to my son, “see – look at the power of words.” He grunted something I didn’t quite comprehend and then climbed back into the car. We made a quick pit stop at the local supermarket – and still my phone kept buzzing. By the time we got to the supermarket I had approximately 350 retweets and by the time we left and made our way home I was up to 550 retweets. I was chuffed to bits but becoming more and more suspicious. By the time we got home I was up to 850 retweets and when both my son and I had unloaded the shopping I’d had another couple of hundred. Within the space of two hours I had had nearly 1000 retweets. My son, who couldn’t quite believe that me, his old mum, could get so many retweets investigated and discovered something I hadn’t noticed.

“You know why you are getting so many retweets don’t you?” my son asked. “No,” I replied somewhat perplexed. And then my son showed me – J. K. Rowling had retweeted my tweet. Finally, I understood why my phone had not stopped buzzing and why my tweet was so popular. J.K. Rowling has over 7 million followers so it’s hardly surprising my tweet for International Women’s Day was far more reaching than I could have ever hoped for.

My son looked on in mild amusement as his forty something year old mother morphed into someone that resembled an excitable 10-year-old – just for a few minutes (maybe hours!). I am a huge fan of J.K. Rowling and read all the Harry Potter books to my children when they were small and these days, putting the Harry Potter movies on is one of the only times I can actually get my teenage children to sit in the same room as me. I’ve also read most of the other books written by J.K. Rowling.

My phone continued to buzz throughout the day and night and still the likes and retweets kept coming. It is almost 2 weeks ago since that happened and I am still getting (although they are far less) likes and retweets for this post. It currently stands at 8300 likes and 6227 retweets. Unlike the title of this post and, sadly, J.K Rowling is not my new best friend but it was a wonderful privilege and fangirl moment for me to see my face on J.K Rowling’s twitter account. I’ve experienced a tiny taste of the kind of following she has and have realised how powerful social media is. J.K Rowling is not my new best friend but like me she is a writer and a woman and a mother. I am so very proud that J.K Rowling chose Malala Yousafzai’s words and my tweet to mark International Women’s Day. 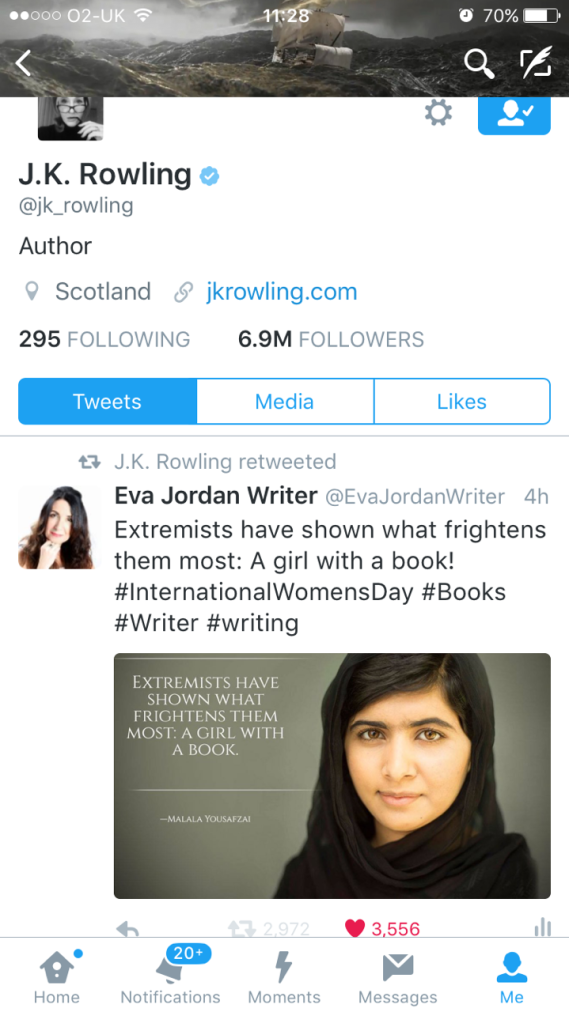