Are your friends to die for?

Did you make friends at school?
Are they still your friends now?
Do you trust them?
Will is on his way to prison. His life is a mess, but who is to blame?

Here, Ross talks about what inspired him to write and he also gives us a brief idea of what to expect from his second upcoming novel The Boy Inside.

I never wanted to go to prison. It was certainly not one of my choices at school when asked. Doctor, postman maybe, radiographer (obviously later on), never prison. I had passed my A-levels but was so unfocused I just decided to get a job. As the years went by I seem to find myself working in a variety of call centres. First, as a phone jockey and then as a manager. Good money, as I was good at it, but hardly inspiring stuff. I found myself never staying in one job for long. Even now, at 42, the last job at 4 years’ service is over twice as long as anything I had achieved before.

I found myself travelling to get my thrills. The usual holidays when I was young, 18-30 etc., European capitals, then later 3 months in Asia and a year in Australia. More obscure capitals followed, living in Spain and then a month in Indonesia and 3 months in South America, before unexpectedly (how did that happen) children arrived. It was at that point, as I was trying buy-to-let and being a landlord, that the need to write a book was becoming very difficult to put aside. I had met such a range of people and had participated in so many amusing, mad events that I hoped I had a book people would be interested in.

I began what eventually became Lazy Blood. Life gets in the way and soon the need to get a job outweighed the urge to finish the book. I was stuck anyway. I had managed to mould many different attributes of hundreds of different people into four likeable and flawed characters, but I was struggling for a start and a beginning; the bite that would make the book interesting and exciting.

I wanted a career change though. No more insurance companies and depressing Mondays, I wanted something exciting. I was going to get it. I actually wanted to join the Police but, as you can imagine, my CV wasn’t going to stand any kind of investigation. The prison service wasn’t so fussy. As government cuts bite it is even less so now, the staff are leaving in droves.

After the training, how I got through those first few weeks I will never know. Only a commitment to myself to finish what I started got me through that period. HMP Peterborough is a B-category local jail. The hardest type to work in. We were constantly understaffed, sometimes running 80 man wings on your own for hours at a time. It is a revolving door for some, the drug addicts and shoplifters, but it takes all the prisoners from Cambridge, Huntingdon and Peterborough Crown and Magistrates Courts.

So there were murderers, rapists and psychopaths merged in with dangerous drivers, embezzlers and drug dealers. All of them meshed together in a crazy world of violence, depression, suicide, anxiety, drug abuse, self-harm and disorganisation that they weren’t allowed to escape from.

Obviously after a little while, I had more ideas and stories than I could ever imagine. I was desperate to get back to writing my book. All the time the book was percolating and composting in my head. I think that was one of my coping mechanisms. When they wanted volunteers to put riot gear on and break up a barricade, I would be there, sometimes just for the experience. When you work in that environment, you certainly know you are alive. Then another child came along and the book went back on the shelf.

By that time I had got to grips with the job. I found consistency, professionalism and politeness with a certain amount of apathy was generally the best way to get the job done. Aggression and arguing generally led to assaults and rage. The prisoners get to know you too. They know which officers will help them and they are also fully aware what a tough job it is.

Another year went by and I took child-friendly hours and started to work in Resettlement. The idea behind it was that you assisted them when they arrived in prison. For example, ringing the bank for them, finishing tenancies and then when it was time to leave you set about making sure people had somewhere to go. Unfortunately, that wasn’t always achievable.

This job still had its difficulties as some people were almost impossible to help. There are many charities out there and Peterborough Council do a brilliant job in housing people, but If you have been made to sign the sex offenders register or, worse, are an arsonist, then it is very hard to find somewhere for you to live as there is a duty of care to existing residents.

I got to chat to a lot of people and got much more material! I still wanted to finish my book and my boy gave me the opportunity. He was waking for his four a.m. feed and with a sense of determination that this was my time, I completed it in the early morning hours. Lazy Blood is available on Amazon and has been well received. Just £1.99 until the 1st of May.

Prison is a crazy place, not for the faint-hearted. It is an unnatural environment but not what people expect. Prison for most is Bad Girls, Shawshank, Prison Break and Porridge. A British jail is none of these things. Most people there are not ‘bad’ people. Sure there are career criminals and obviously, these figure strongly in the book too. That’s why we love crime books, but many have just done something stupid. Perhaps used their phone whilst driving and killed someone. Silly things with terrible consequences. Got involved with drugs and had to steal to service their habit. Maybe borrowed a few quid from work and things have got out of hand, or had a few beers and got in a fight. These things could happen to most of us. This is their story too. The list is endless and so are the ideas for characters.

I finally left the job after nearly four years to get my first book published and take a year out to do some more writing. I will look back fondly on my time there though. By far and away it was the worst job I ever had, but it was also the best job. I worked with some amazing people as well. The money wasn’t great, but the commitment had to be. I’m nearly six foot tall, mature (ish) and fourteen stone so I walked on those wings armed with physical presence and life experience. You had to bow your head to small school leavers on their first day in the job, whose nervous hands fumbled with confusing keys, as they entered the abyss.

What I wanted to focus on for my second book, ‘The Boy Inside,’ was one of the more depressing and sad parts of prison society. The young. Before you judge these boys in hoodies you should really have walked a mile in their shoes. I know that is a little cliché but many of them never stood a chance. Parents who were drug dealers for example, or no parents at all.

Once you are in the police and prison system, especially as a juvenile, it is hard to get out. The people in it often do not have the skills, knowledge or finances to climb out of the hole they are in. They become careless, chaotic and have no expectation of any kind of future. They are a burden to society and there seems to be little appetite to deal with these issues. There are many who work tirelessly with young people and try to get them back on track, often without being paid, but it is hard work and often unsuccessful.

Ironically to paraphrase The Shawshank Redemption, a life without hope is a terrible thing. Many of these issues are brought up in ‘Lazy Blood’ and the ‘The Boy Inside,’ but they are also books about persistence, determination and luck. In some ways they are also modern love stories. I hope to change your perception of those who end up in prison, but after reading these novels there is one thing I can be sure of. You will never want to go there yourself.

Lazy Blood is out at Amazon now, read the reviews and you decide.

After you have finished the book you can visit the website and see if you can match the locations in the story to those on the site. Some of the names have been changed for obvious reasons. All the best, Ross.

Thank you for such an interesting post, Ross. If you want to connect with Ross on social media you can find him on Facebook and on Twitter. 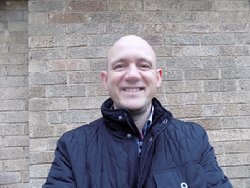