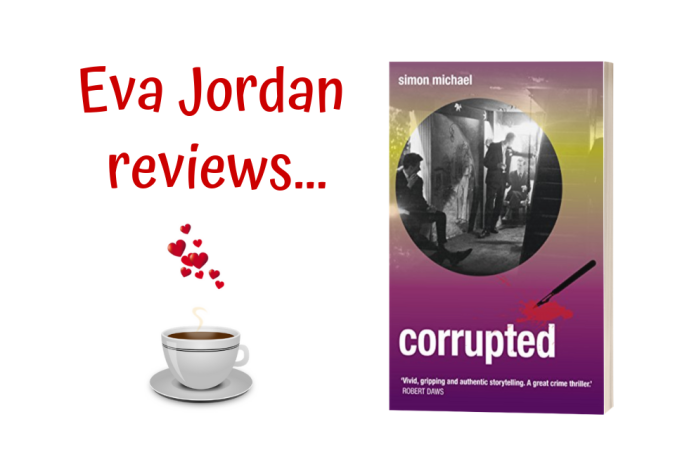 Corrupted, the latest book by fellow Urbane published author Simon Michael, is the fourth in a series of noir gangster crime thrillers concerning criminal barrister Charles Holborne. However, although part of a series there is just enough back-story for it to read perfectly well as a standalone. Set in London’s swinging sixties, the author mixes historical fact with fiction, making Corruption a story that sees its fictional barrister, Charles Holborne QC, drawn into the real-life investigation of a sex ring scandal that involved the Kray twins and some very powerful but corrupt politicians. The author’s note reads, ‘This is not a true crime novel, but the historical facts upon which it is based did actually occur.’

Written in close third person, Charles, the flawed main protagonist, narrates throughout and the story itself unfolds during several crucial months of 1964, namely Friday 26th June–Monday 24th August. Charles, a Jewish East Ender doing well for himself, building his reputation as a brilliant murder trial lawyer, is living with his partner Sally. On the surface all looks well, however, Charles is clearly at odds with himself. ‘An East Ender, born and bred on the wrong side of town, the wrong side of the track and the wrong side of the law, Charles has muscled his way into the Establishment by becoming a war hero, barrister… His acquaintances include Oxbridge graduates with country seats, titles and racehorses; they also include boxers, burglars and con artists. He no longer quite fits in anywhere, and everywhere feels like the wrong place.’

Charles is asked to help a young lad called Teddy who has been arrested and accused of murder. Charles agrees to take the case on and in doing so takes the reader on a magical mystery tour of 1960s London including the music, fashion and haircuts of the time. The author also gives the reader a fascinating glimpse of Fleet Street during the sixties, sprinkled with sporadic but fascinating historical facts like the time Charles takes a run past Jack Straw’s Castle–the pub and reputed favourite haunt of Charles Dickens, Karl Marx and Bram Stoker. However, at the heart of this story is a dark, uncomfortable tale about power, corruption and sexual abuse. Pacey, but often sombre and heartbreaking, it also includes great dialogue and some extremely well-written courtroom drama. A thrilling page-turner and one I highly recommend.