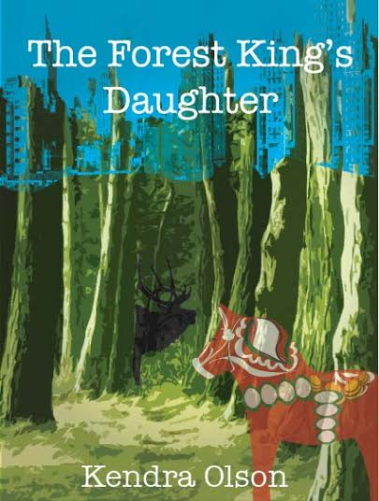 The year is 1886 and Swedish teenager, Ingrid Andersdotter, is about to face a series of life-changing events. When Ingrid forgets to close the barn door one freezing cold night, there will be dire consequences for her family. To make matters worse, her attraction to the new school teacher leads to ostracism and shame. Ingrid’s strong opinions and the pressure of the powerful village church to conform to ideas she doesn’t believe in put her at odds with her traditional community.
Her only option is to leave her home and family. But is she brave enough to make an ocean crossing to a strange new land on her own, leaving everything she knows far behind? And will she find the freedom she dreams of if she takes such a risk?
Told through the lens of a Swedish fairy tale, this epic coming-of-age story, is both a page-turning personal account of one feisty young woman’s determination to seek a better life, and the tale of many single women who emigrated from Sweden to America in the 19th century.

Inspired by the pioneering spirit of her great grandmother, Kendra tells us about her writing journey and how the idea for The Forest King’s Daughter developed.

My writing journey, by Kendra Olson

I remember loving stories as a kid—Goodnight Horsey, The Velveteen Rabbit and Sideways Stories from Wayside School, were some of my favourites. Later I fell in love with Anne of Green Gables, The Secret Garden, Charlotte’s Web and A Little Princess, amongst many others. I’ll never forget the scene in The Velveteen Rabbit where the little boy, after contracting scarlet fever, is forced to burn all his toys, including his best friend, the Rabbit. I found this scene deeply disturbing and never really got over it.

As a little girl, my dolls were very real to me and I was convinced that, once I went to sleep at night, they spent many hours talking to each other and having parties without me. So the idea that, were I to become ill, I would have to burn them—essentially killing them—traumatised me no end. As you can tell, I was a very imaginative child. I spent many hours—days even—involved in long, complex play sessions.

Then, when I was seven, I was given a diary by my grandmother—one of those old-fashioned ones with a hard cover and a tiny lock and key to keep your brother from reading your secrets (though he did anyway—the lock was easily breakable). I remember it was decorated in garish neon colours, as was considered stylish back in the 1980s. I wrote in it every day, trying to write smaller and less so as not to use the pages up too quickly. My grandmother had told me to write what happens to me, but I tended to write anything and everything in it instead and only rarely gave a true account of my day, instead preferring to record my thoughts, feelings, hopes, worries, dreams and, yes, the boys I fancied at school. After a little while I even ventured to write stories, and the outlines of stories, mostly involving little girls and fairies and often times little girls who’d turned into fairies, and mermaids, and fairy mermaids. Writing became a kind of release for me, a safe space from which to reflect, imagine and just be.

Fast forward a few years to my time in secondary school and my all-time favourite class: English. Our teacher encouraged us to write stories in response to our readings. As we’d recently finished Romeo and Juliet, and Halloween was coming up—a huge deal in the States, where I grew up—I wrote a ghost story with a romantic twist. My teacher made me read it aloud in front of the entire class—something I was terrified of doing—and they loved it! Kids who otherwise ignored me or made fun of me clapped heartily, and told me they’d actually been frightened by it. It was my moment of triumph in an otherwise fairly unhappy school life.

Later yet I enrolled in a writing programme, encouraged by my grandfather who’d worked as a children’s writer and editor for most of his life. I learned how to write fiction and non-fiction for the American magazine market. I then followed this up by taking a course in writing for children, which my grandfather also took. I realised the joy which could be gained from having a writing partner and submitted several stories and articles to publications, none of which were published, although I did receive some nice feedback from editors.

Then, when I was in university, working and helping out at home, I didn’t have time to write anything other than term papers. I sort of forgot all about writing stories. And this was how life remained for some years. After getting married and moving to London I had even less time–emigration is exhausting!

After a few years, life settled down and I enrolled for a simple, ten-week, online introductory creative writing class with writingclasses.co.uk. The course could be completed anytime, anywhere and, most importantly, every assignment was read by your tutor and given personalised feedback—a feature I loved. The assignments were fun too. One of my favourites was to write a story with each new line beginning with a consecutive letter of the alphabet. It was difficult but very worthwhile as it trained me to channel my creativity and make every word count. Another of my favourites was to write a modern day fairy tale. Somewhere in the midst of the many courses I took, I came up with the character of Ingrid, the protagonist of my now-published novel The Forest King’s Daughter.

The novel itself took me several years to write, with many false starts and a lot of research needing to be done—the story takes place in 19th century rural Sweden, a place I’d never lived in but was keen to write about. Eventually, I did visit Sweden and met my family there (the story was inspired by my imagining what life might have been like for women from my great grandmother’s generation who emigrated to America). And, when my novel was finished, I had it professionally edited and began the arduous search for agents. While I didn’t find one, I did find a publisher. On the 5th March 2015, The Forest King’s Daughter was published by Pilrig Press. It was the biggest triumph of all for me, especially coming as it did halfway through my Creative Writing MLitt at the University of Glasgow.

Since completing my degree and having my novel published I’ve been working on a second novel, also historical but taking place in a very different time period. I’ve also discovered a love for writing book reviews, which I write both for Lothian Life as well as for my blog, which I began as a way of promoting my first novel. I’ve found new literary avenues to explore, and new publications to submit to, as well as rediscovering some of my old favourites.

Recently, I even reread The Velveteen Rabbit and, while I still found it sad, it was no longer the tragedy it once was. In fact, I could now see the ending for what it really was: a sign of hope. In my despair at the perceived cruelty in the story, I’d failed to remember that, before the rabbit can be burned, the nursery magic Fairy takes him by the hand and rewards him for his love to the boy by turning him into a real rabbit. While I’d written for many years before having anything published, the act of writing continues to offer me hope and a space in which to explore, reflect and understand my life and the world around me. The publication of my first novel, The Forest King’s Daughter, served to validate this hope and, indeed, turn me into a real writer.

The Forest King’s Daughter is available from Amazon.

5 thoughts on “Eva Jordan in conversation with… Kendra Olson”